About 85% of men by the age of 50 will experience major hair thinning. Some men may start losing hair as early as age 21. Androgenetic Alopecia is the cause of about 95% of people that lose their hair. When dealing with hair loss, it’s important to uncover the cause to develop a specific treatment plan. Receding hairlines, bald spots, and hair loss can be stressful, but don’t despair: Hair Genesis explains some root causes and treatment options that you have.

In both men and women, pattern hair loss is typically caused by one of three things: age, genetics, and hormones. On average, 40 million men in the United States alone are affected by pattern hair loss. A gradual thinning of hair on the man’s scalp is the number one most common symptom and can range from mild to moderate to severe while presenting as a pattern such as receding hairline, thinning at the part, or thinning on the crown.

What Causes Hair Loss in Men

As people age, some hair loss is to be expected. Over time, the color and texture of your hair change. A single hair strand has an average life of two to seven years, and as you age, the shorter, more delicate hair falls out first. While some level of hair loss is normal, losing a lot of hair at once and in large quantities is not. Also, typical hair loss for the average male doesn’t include patterned hair loss. 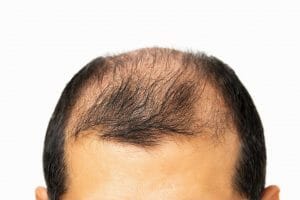 Male pattern baldness can start as early as the teenage years for some males and can last for many years. The thinning usually starts to happen along both of the temples and forms an m-shaped hairline. The balding can begin at the top of the head, and then the males can end up completely bald.

Men with pattern hair loss tend to have family members that have the same pattern of baldness. If a male has a close relative with male pattern baldness, they are more likely to develop the condition themselves. Symptoms often gradually start as a thinning of the hair on the male’s scalp and then extend into a balding or receding hairline on certain parts of the scalp.

While some people think the male’s genetics come only from their father’s side of the family, genes for hair loss actually come from both sides of the family. As it’s commonly believed that genetics is the biggest factor in pattern hair loss, it’s not as straightforward as genetics only. A combination of genetics, hormones, and the aging process all play a part in hair loss in men.

The most contributing underlying factor to male pattern hair loss is believed to involve sex hormones in the body. Dihydrotestosterone (DHT) is a type of sex hormone called androgen that assists in the development of body hair. Unfortunately, DHT can also cause men to lose hair earlier and faster. 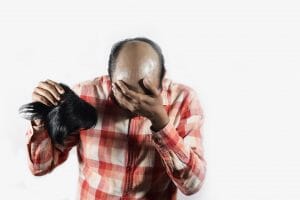 Derived from testosterone, DHT is one of the sex hormones present in both women and men. It’s an androgen sex hormone that helps the body go through puberty and develop certain characteristics like a deep voice, increased muscle mass, and body hair production. Women generally have lower levels of testosterone than men.

When a male has high levels of androgens, including DHT, the life cycle of the hair follicle can be shortened and shrink hair follicles. As a result, hair can grow out looking more brittle and thin. High levels of DHT can make it harder for follicles to stimulate new hair growth when the hair falls out.

The susceptibility of the effects of DHT on hair growth is based on an individual’s androgen receptor (AR) gene variations. Androgen receptors allow hormones like DHT and testosterone to bind to the receptor site. Normal hormone processes like bodily hair growth happen during the binding activity.

The effects of 5-Alpha-Reductase (5AR)

The enzyme 5-Alpha-Reductase (5AR) and androgen receptor levels in hair follicles have been discovered to be higher in men and women diagnosed with pattern hair loss. When you use formulations from HairGenesis, they work by stopping the negative activity and cycles of the 5AR enzyme. This helps to prevent damage to the hair follicle that high levels of DHT have caused. As a result, healthy hair follicles begin to produce strong and healthy hair. 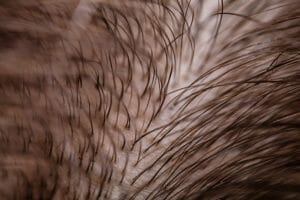 Call Us For More Information

If you’re tired of dealing with male pattern hair loss, give Hair Genesis a call to see what treatment options are available. We enjoy assisting our patients with their hair loss treatment plans. Call us today to schedule an appointment to meet with a specialist and develop a plan unique to your specific needs!

Other articles: Three Causes of Hairloss in Women