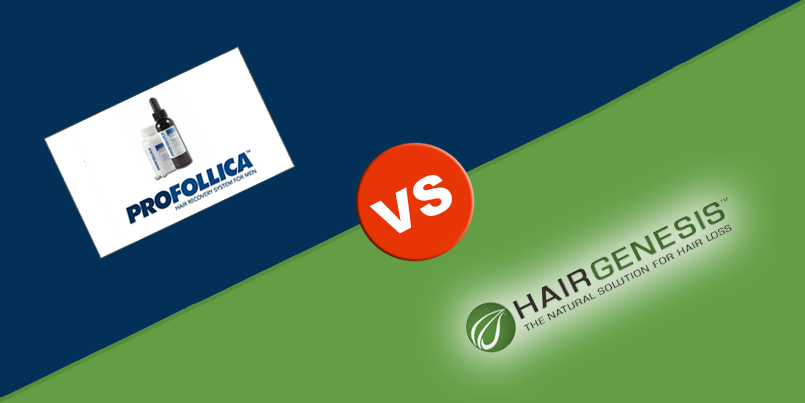 What are the advantages of HairGenesis® over Profollica?

Profollica™, yet another hair loss treatment brand appears to be based on a mix of natural substances and amino acids — and, according to their website, the product is claimed to be supported with a study. Profollica™ is available in an ingestible tablet and a topical application. The purveyors of this product line claim to based on a series of benefits, including blockade of 5 alpha-reductase, stimulation of blood circulation, prevention of premature greying and other such benefits

Unfortunately, though a study is noted, a scan of the worldwide medical and scientific research clearinghouse www.pubmed.com failed to turn up any published research in direct support of the performance claims suggested on the Profollica™ website. In light of our twenty-year track record in the field, when we examine such claims, certain questions naturally arise.

First, since to our knowledge, loss of pigmentation in the hair follicle (i.e. the process by which hair turns grey) is known to be a phenomenon separate and distinct from the miniaturization that occurs with androgenetic alopecia (i.e. common pattern hair loss). So we are at a loss to understand the scientific basis under which the Profollica product appears to create linkage between the two and also to infer that their product treats both maladies. We would certainly welcome the submission of a critically peer-reviewed and published monograph addressing this question.

Moreover, as, to our knowledge, it has also been definitively shown in multiple well-controlled published studies that local blood supply in the balding scalp has essentially nothing to do with the onset and progression of pattern hair loss (bald people have scalps equally well vascularized as those with a full set of terminally dense hair) we are interested to listen to the Profollica™ folks explain how those two phenotypes are connected.

We are certainly prepared to admit that we may be mistaken. However, to this point in time, and inasmuch as we find no linkage between grey hair and hair loss, and since we cannot agree with a hypothesis that links blood supply to androgenetic alopecia, we have chosen to pursue a different research path. Fortunately, the path we’ve chosen has been tested and successfully validated using precisely the same scientifically stringent conditions (placebo controlled, randomized, double-blind) used to test Rx based compositions.

In sum, the drug-free formulations comprising HairGenesis® have been demonstrated safe and effective under numerous well-designed studies, notably an IRB-monitored, placebo-controlled, double blind, randomized, peer-reviewed and published trial. Additionally, HairGenesis® is supported with an ongoing R&D infrastructure which has resulted in the development of seven distinct generations of continually-improved formulations.

Partnering with university-based research collaborators at State University, New York (SUNY), University of Chicago, and elsewhere, HairGenesis® has developed proprietary systems wherein dual-mechanisms of action mean that our formulations work in a synergistic manner to protect and revitalize thinning scalp hair. We’ve also pioneered a proprietary delivery system to optimize the efficiency by which the active substances are taken up by the target hair follicles. As noted, we’ve also backed our hypotheses with critically peer-reviewed and published data. And there are patents pending on the landmark discoveries we’ve made.

Of note, our latest formulas have been shown to block micro-inflammation of the hair follicle as well as inhibit the negative consequences of 5 alpha dihydrotestosterone — a pathogenic metabolite of the steroid hormone testosterone (T). This means that HairGenesis® demonstrably helps revitalize your hair in more than one way. While consistently excellent clinical results are now possible for a broad spectrum of hair loss affected individuals, because HairGenesis® is run by hair loss experts, not marketers, you can expect the results you achieve to get even better as our R&D leads to the development of ever more effective treatment formulas. With a client base that spans all six populated continents, those who use HairGenesis® have come to understand how uniquely safe and powerful our PRODUCTS really are. Many clients have been with us for more than ten years and will simply not be without their HairGenesis® PRODUCTS.

So when it comes to trusting the health of your hair, choose wisely — choose HairGenesis®.